The ThinPrep® family is the leader in cervical cancer prevention, having to show very important first place records:

This year we proudly celebrate 20 years of ThinPrep® Pap Test.
When ThinPrep® Pap Test was approved and started being used in 1996, all Pap Tests were performed by the conventional method and the HPV Test was not even part of the algorithm in women’s cervical cancer prevention. Since then, there has been a significant reduction in cancer incidents in the USA1.
This, undoubtedly, was an important progress in prevention.
Today, more than 650 million ThinPrep® Pap Tests have been conducted and, at the same time, more that 6,000 ThinPrep®2 processors are used.

― An exclusive method of gynaecological testing in the biggest hospitals and diagnostic centers in Greece.

Since 2015, in cooperation with Group Generali, Thin Prep has become the exclusive method for conducting gynaecological testing, both for prevention and for diagnosis in the largest hospitals and diagnostic centers in Greece. 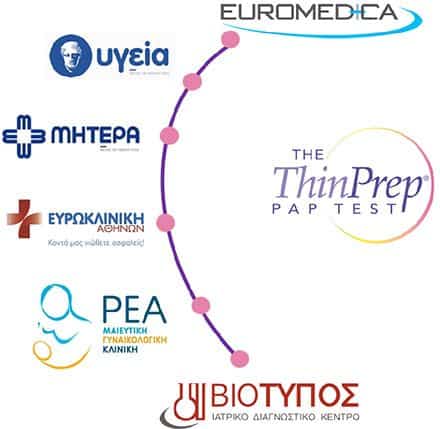 Today, the combination of Pap Test + HPV Test (co-testing) is considered to be the best strategy for detecting high-grade lesions in women between 30 and 65 years old, according to the most recent clinical studies5,6.

This means that only ONE sample collection, covers for a woman all prevention testing for cervical cancer

Recent Guidelines of the USA Obstetrics/ Gynaecologists Conference also advise the combination of Pap Test + HPV Test as the method of choice for women’s testing7.

The information referred to for general information and informing the public and in any case can not replace a doctor or other suitably qualified health professional. The responsibility of the media carries by ENORASIS SA